The spicy history of how pumpkin spice got so popular

Autumn is here, and that can only mean one thing — everything now comes in a ‘pumpkin spice’ option. You might be surprised to hear, however, that this isn’t a modern fad; the spice mix goes back a long way.

Despite its name, pumpkin spice doesn’t contain any pumpkin. The name stuck because this mix was originally marketed as flavoring for pumpkin-containing items such as pies or cakes. It hails from the 1930’s when US-based McCormick started selling the mix commercially under the name of ‘pumpkin pie spice’.

So if it’s not pumpkin, what is it? Well, it is a mixture of sweet spices — cinnamon, nutmeg, ginger, cloves — all ground together in various proportions; sometimes, it can also include allspice. It’s similar in composition to mixes typically added to British pudding. Although it doesn’t necessarily have the same proportions of each spice, it’s very likely that the two are related.

So where did the British get it from?

In very broad lines, as tended to be the case for most spices in Europe, the answer is South-East Asia.

Even today, the world’s chief source of nutmeg (Myristica fragrans) are the Malaku Islands of Indonesia, where the plant is endemic. This area accounts for around 90% of the global production of nutmeg, which earned it the moniker of the ‘Spice Islands‘. Malaysia also produces some nutmeg, as do the Caribbean islands. There is a species of ‘California nutmeg’ native to the US, but this isn’t related to true nutmeg and is not used as a spice.

Nutmeg fruit with the seed (from which the spice is made) and seed covering or ‘aril’ (from which mace is produced). Image via Pixabay.

Cinnamon is also chiefly produced in South and South-East Asia, with Indonesia, China, Vietnam, and Sri Lanka accounting for over 90% of total production. India, China, Nigeria, and Nepal grow most of the world’s ginger. Cloves used to come from Indonesia, but the species has since been transported to and successfully grown in other warm countries such as Mexico.

How did it all start

The individual spices that make up pumpkin spice have long been used in the places where they’re endemic.

I have read and agree to the terms & conditions. 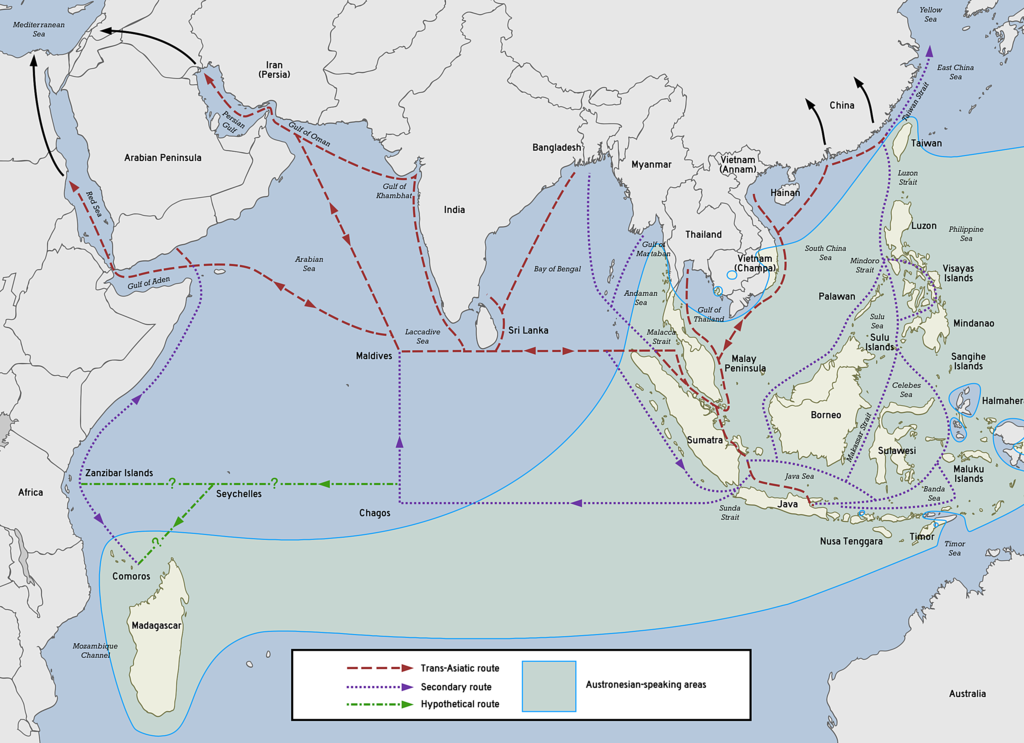 Map of protohistoric spice trade routes of the Austronasian peoples  in the Indian Ocean. Image created by Wikiuser Obsidian Soul after Palgrave Macmillan.

Nutmeg, for example, is a traditional ingredient in Indian cuisine and employed as a medicinal plant in countries all around the Indian Ocean. It was also the lynchpin of bustling trade routes in the area; natives on the Banda Islands made a decent living by growing their crops of spices, while Arab and Indian traders made a fortune from carrying it around.

Europeans got their first taste of nutmeg from Arab traders. There is some evidence to suggest that it made its way around these parts back when Rome still had an empire. For example, Pliny the Elder describes several spices in his book Naturalis Historia, including nutmeg, and his description is accurate enough to suggest he had actually encountered the plant and wasn’t basing his words on hearsay. Keep in mind however that the Romans had a more wide-bearing definition of spices than we do today, which included medical plants, those used for perfumes or intended to be burnt, such as incense, plants that were used in makeup, and those that could be employed to preserve food. Pedanius Disocorides, a physician born in the Greek states of Asia Minor also describes over six hundred medicinal plants (including spices) coming from the Orient in his medical treatise De materia medica. 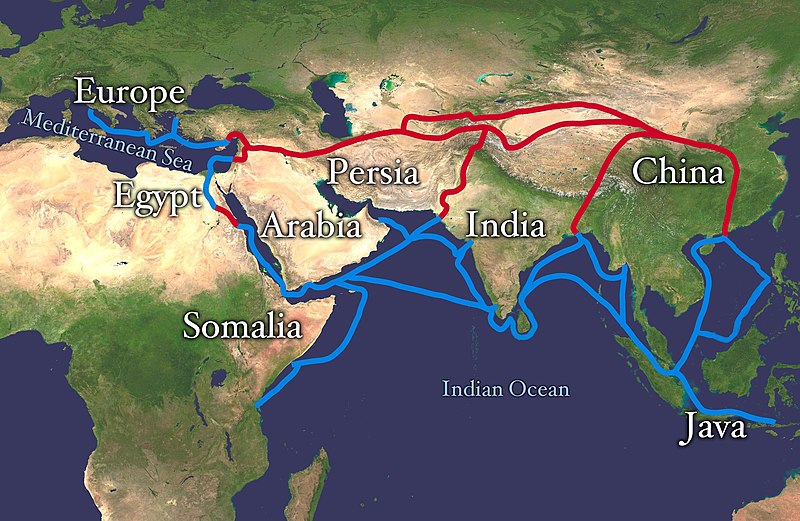 The land routes (red) and maritime routes (blue) of the Silk Road cca. the 11th century. Image via Wikimedia.

From works such as these, we gather that spices including nutmeg and cinnamon made their way to Europe either by ship from ports on the western coast of India, through the Red Sea and then Turkey, or on land routes through China on the “Via scitica” (the Scythian Road) — from Beijing through the Gobi Desert, Kazakhstan, over the Ural Mountains and the Caspian Sea, then over the Black Sea and Azov Sea, finally arriving at Constantinople (today’s Istanbul). Spices also sometimes traveled via the “Via serica” (literally “the Silk Road”), which was the avenue of trade and diplomacy between China and Europe (mostly the Roman Empire) in antiquity.

Although these trade routes of Antiquity introduced Europeans to the plants that would eventually culminate in the pumpkin spice, these were still extremely expensive commodities. By the time that Emperor Diocletian issued his Edict of Maximum Prices (“Edictum de Maximis pretiis”) in the year 301 AD, many spices were worth more than gold or jewels per the same unit of volume. It has to be mentioned that Roman coins were severely debased (devalued by inflation) at the time due to shenanigans by a long string of rulers during the Imperial Crisis, but these affected the prices of all commodities.

Spices were so extremely expensive because they needed to be transported over vast stretches of land or sea, changing hands several times, with everyone taking a cut (and increasing the price) in the process. This leads us nicely to:

Everybody was making bank from carrying spices towards Europe. So they kept the source a secret from those who bought them. Even in the days of Pliny, merchants would talk of winged beasts guarding the spices and other similarly fantastical tales, and Pliny mocked them relentlessly for it. But the mystery only deepened with the collapse of the Roman Empire when a lot of local knowledge (including that of far-away places) was lost.

Although we know that spices such as nutmeg were still being used in Europe by the 8th century, where they came from was still a mystery. As far as the locals knew, spices grew on foreign ships and were harvested in Venice. By the time it reached Europe, a bag of nutmeg was worth more than most people made in a lifetime.

With that in mind, you’ll be so surprised to hear what happened after explorers such as Vasco da Gama discovered the sea route to India, and the islands of South-East Asia in the process, in around 1499. Yup, it was war.

Not with the natives, per se — although the Dutch East India Company would end up wiping out around 90% of them and enslaving the rest — and not instantly. Portuguese traders were very content to just buy the spices from the Bandanese at first, partly because it was still lucrative, partly because they tried (and failed) to establish fortifications on the island.

But there was, eventually, war between the European powers of Britain, Portugal, Spain, and the Dutch. Spices were stupidly expensive in Europe (at this time, nutmeg was still more expensive than gold), so everybody wanted to have a monopoly on them, overcharge, and keep all the profits. The fighting started after the Dutch established their first land bases in the area, around 1512, and raged on until the late 1660s.

“The surrender of the Prince Royal” by Willem van de Velde the Younger. Prince Royal was a massive English flagship surrendered to the Dutch after it hit a sandbank during the Four Days’ Battle, as both countries fought to over spice colonies and trade routes.

Britain managed to hold onto the island of Rhun (or Run) which became their first (but definitely not last) colony until 1667, when they traded it over for Manhattan. This gave the Dutch pretty much full control over all the nutmeg, cloves, and a bunch of other local spices that flowed towards Europe — so they had full control over how expensive they were (very expensive). From there, the Dutch East India Company (or ‘Vereenigde Oostindische Compagnie’, VOC, in Dutch) grew into the richest company in history, estimated at around 7.8 trillion of your modern dollars. Apple and Google, for comparison, are worth ‘only’ $2 trillion and $1 trillion, respectively.

As a side-note, it can be argued that the globalized trade and interdependent markets of today wouldn’t exist in their current form if it weren’t for the VOC. It set the blueprint we still follow today: for example, it was the first-ever company to sell its shares publicly and to directly tie two economies on different continents together. All in all a very impressive endeavor, if you can overlook the astonishing depths of moral depravity and human suffering it was built on.

It would all however end eventually, as all things do, when in 1769 French-born Pierre Poivre smuggled nutmeg seedlings to the Mauritius islands. The company would eventually be dissolved, on the last day of the year 1799.

During the Napoleonic wars, the Netherlands were technically England’s enemies as they were kind of strong-armed into the French Empire. With this excuse in hand, the British invaded Dutch holdings in South-East Asia, and nutmeg became a cherished part of British culture (and was enthusiastically planted in any and all colonies where it would grow).

How we put it in a latte

Pumpkin spice today is heavily associated with autumn. It got here because the mix was advertised specifically for products containing pumpkin, such as pies or cakes, in the US (mainly due to the British legacy of using spices such as nutmeg and cloves in cakes and puddings). Since pumpkins were in season in the autumn, when those orange gourds were ripe for harvest (they don’t keep very well so most don’t last the winter), that’s when most Americans first encountered the mix, and an association formed.

Over time, however, people figured out that you can sell pumpkin spice even sans pumpkin. So they did.

Spices today definitely don’t command the astronomical prices they did a mere 200 years ago — chiefly because most aren’t controlled by any monopolies. They’re definitely still valued, but they’re not reserved only for the tables of the rich and powerful any longer. Being much more affordable means that more people are willing to pay the extra cost just to enjoy the flavors they bring. So, naturally, people started putting it in coffee.

Pumpkin spice, in itself, isn’t even very unique — variations on this mix have been in use for the last 2 to 3 centuries now. It caught on specifically during the late 90s in coffee shops, and really took off with Starbucks’ pumpkin spice latte, introduced in 2003.

Exactly why it’s so popular is debatable. However, it’s worth pointing out that cinnamon, nutmeg, and to some extent cloves as well, are heavily used in home-made food and sweets during the winter holidays, especially in British culture (which heavily informed American cooking and customs). Smells and aromas are strong elicitors of feelings and memories, so maybe these lattes bring us back to our emotional happy place, one where we’re enjoying the holidays with our family at home around the fire.

Unseating Parliamentarians: Then and Now

Unseating Parliamentarians: Then and Now