Bollywood director Shakun Batra originally envisioned the beaches of Sri Lanka as the location for his latest film, a relationship drama for one of India’s biggest studios.

But with the COVID-19 pandemic making international travel nearly impossible, he had to quickly choose somewhere else.

“All I could think was, it’s like you’re a sportsman and the rules of the game have changed,” Batra said by phone from Goa, a coastal state south of Mumbai, which he had settled on as a backup location.

After months of lockdown and uncertainty, the world’s biggest movie industry is finally running again. But with the pandemic still raging, Bollywood casts and crews are still figuring out how to work — and how to pull off the sumptuous locations and dance sequences it’s known for — without getting many people sick.

Shooting is taking place against the backdrop of a COVID-19 outbreak that India has struggled to control, with nearly 9 million recorded infections, second most after the U.S. Scientists estimate that hundreds of thousands of new infections are going undetected every week due to a widespread inability to observe social distancing.

“It’s tough because you have to hold on to that same creative vision, but react to a whole new set of conditions,” Batra said. People crowd a marketplace for Diwali festival shopping in Mumbai, India, in November.

After picking new locations for his still-untitled film, due out in April from Dharma Productions, he had to contend with another issue: a series of COVID-19 cases on set. Batra declined to go into details, citing privacy concerns, but said the infections slowed down shooting because people had to be quarantined and the sets shut down and sanitized.

Movie sets have instituted a variety of precautions.

Among the most elaborate are sprinkler systems that douse costumes in disinfectant and unproven sterilization rooms that apply ultraviolet light to camera kits and crew members.

Directors are shooting with skeleton crews, makeup artists are working without assistants, and stars have been asked to leave their entourages at home. Multiple productions denied a Times reporter’s request to attend filming.

The production team of “Dostana 2,” the sequel to a 2008 romantic comedy blockbuster, was trying to figure out how to make a wedding sequence — one of the signature scenes of Bollywood films — look lavish with just 50 dancers instead of 300.

“Those big numbers that have hundreds of backup dancers — they’re definitely in jeopardy,” said the film’s assistant director, Jehan Handa.

“In Bollywood, the number of people you have in a song is associated with its budget — if you can afford hundreds of dancers and all their costumes then it comes across as a very, big important song. Anything less, and it can look a bit cheap.”

Actors and crew members are tested for COVID-19 and undergo daily temperature checks, but testing is spotty after that — and every shoot carries risk.

“You have to stay close to each other when filming, otherwise it won’t look real,” said actress Neha Sharma. “Inevitably you feel quite vulnerable. I guess all we can do is have some faith.”

In May, the state government of Maharashtra, which includes the film hub Mumbai, released guidelines requiring crews to operate at one-third their usual size and for members to remain six feet apart and wear masks and gloves at all times. Those appearing on camera are exempt, but the state said “no extravagant scenes” should be filmed until the pandemic threat subsides.

Still, safety levels vary widely from set to set. Some crews are put up in five-star hotels, quarantine for a week before filming and are ordered to wear full-body protective gear throughout 12 hours or more of shooting a day.

Others take far fewer precautions, which has been blamed for a series of COVID-19 outbreaks on sets. After cases were reported among the cast and crew of Hindi TV soap operas earlier this fall, the productions endured numerous shutdowns and skyrocketing costs.

“The fact of the matter is people need to work regardless if they feel safe — you can’t afford not to,” said one member of a production team who requested anonymity to protect his job. “In the Bollywood hierarchy only stars and directors have the clout to stop shooting or start up again. I’ve heard of some actors saying, ‘I don’t have symptoms, let’s carry on.’”

Though India is a center of visual-effects outsourcing for Hollywood — and recent hits such as “Padmaavat” and “Baahubali” have featured elaborate digital scenes — the process is too expensive to be an option for most Indian producers.

“The West can allocate $10 million just to special effects — that’s pretty much the whole budget for some films” in India, said producer Konark Gowariker.

Usually a film’s biggest source of revenue is its theatrical release. But restrictions on theaters — only some states have reopened them, and most are allowed to operate at only half-capacity — have dissuaded production companies from investing in big-budget movies.

More films are being released directly to streaming platforms such as Netflix and Amazon’s Prime Video, with big-screen legends including Amitabh Bachchan — who recovered from COVID-19 in August — making their straight-to-digital debuts. 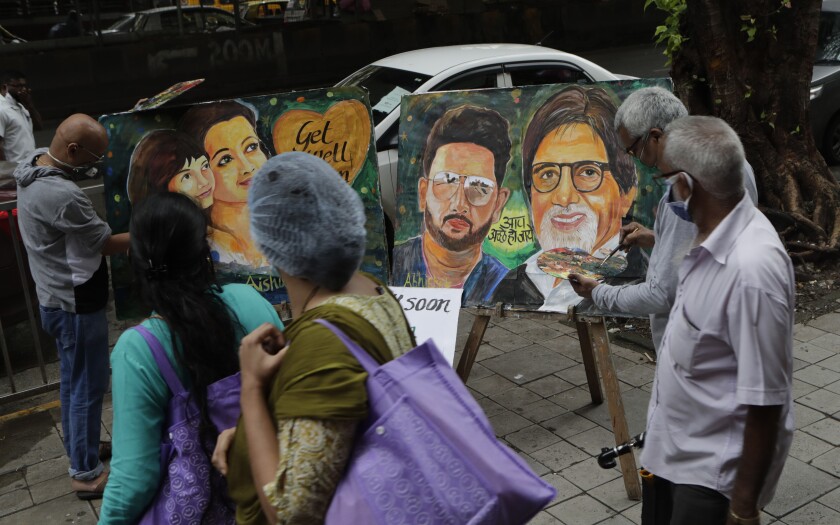 Student artists painted portraits of Bollywood star Amitabh Bachchan and his family after he, his son and two other family members tested positive for the coronavirus in July.

The industry’s hope is that theaters will rebound, and that Indians’ fascination with movie stars will make it worth the wait.

“In America, people watch a film once, maybe twice,” Gowariker said. “In India, if people like a film they go five times. If they like the actor but the film’s bad they might go three times.”

In the meantime, the restrictions could result in smaller-scale family dramas with simpler sets, the sort of films that until now have only been made by India’s few independent directors.

After the pandemic exposed India’s rampant social inequalities — with millions of migrant laborers left destitute and forced to walk home when a nationwide lockdown was declared in March — some filmmakers believe audiences may have less appetite for the all-singing, all-dancing, high-glam fare that Bollywood typically churns out.

“Star value has really taken a hit, whereas the ordinary guy and his value has risen exponentially,” Handa said. “They were the ones out there during the pandemic, who didn’t have the luxury of staying home.”

Sanghera is a special correspondent.